Rare set of items published by Radical Action Cooperative (RAC), described by Beni as “a communal organization which evolved during the Columbia University struggle of Spring 1968. Tony Verlaan participated in it on and off from about March to about October 1968. Migrated to Cambridge in late 1969, where King Collins and others in it became the Council for Conscious Existence, a situationist or pro-situationist group hostile to Verlaan and other New York city Situationists” (Reference: A Bibliography of North American Situationist Texts, 1975, p. 103).

King Collins, one of the group’s co-founders and main contributors, explains the context within which RAC was born, with a specific reference to the item Critique of Columbia S.D.S. featured here: “After the bust, SDS [Students for a Democratic Society] set about the construction of a “strike committee” dominated by their own cadre. Peter [Waring] and I and other new found friends, declined to tie in with SDS and instead set up our own organizational space at Columbia Teachers College, just across the street from the Columbia campus. The administration of Teachers College, trying to avoid any direct confrontation, agreed to give us some office space and access to typewriters and some duplicating equipment. We met often and did a few actions, some of them perhaps deserving of mention (later). We wrote a critique of the college and of SDS, from our homegrown sociological and anarchist perspective.”(Reference: From Student Life to Political Commune: The Radical Action Cooperative And The Situationist International, revised August 2014, available online at http://www.greenmac.com/CCE/RAC_01.html).

Another item discussed here (Life, Not Survival: A Manifesto) played a critical role in connecting RAC with Situationist International members in New York: “Chasse and Elwell wrote to RAC shortly after we published a document (It was called “RAC Manifesto: Life not Survial.”) Their letter raised some interesting questions and I met briefly with Chasse, and he made it clear that my thinking about revolution was not adequate in his eyes.” (From Student Life…).  Tony Verlaan, on the other hand, developed a much closer relationship with RAC members, eventually joining the group and influencing its members. As Fabrice de San Mateo notes in his preface to the French translation of Situationist International (review of the American section of the S.I.): “Verlaan engaged in discussion with some of its members and, as a result of this contact, the RAC proclaimed its affinities with the SI. Rapidly, the situationist came to share the communal dwelling of the RAC and to participate in its activities.”

Verlaan’s participation, however, was a “major source of disagreement” within the American section of the S.I. The first issue of Situationist International features a short article (“Opposition Falsified”) that points at this very tension:”Out of the Columbia strike came a bizarre communitarian grouping called the Radical Action Cooperative (RAC). They opposed themselves to the subleninists all around them, claimed to start from a critique of daily life and declared affinities with the thought of the SI. But they quickly exposed themselves as inflictions of their own boredom and confusion, as ideologists of daily life. RAC migrated to Harvard where they provoked the unimaginative ‘confrontations’ from which the well-disciplined zombies of PL tried to profit.”(translated from the French by Bill Brown, 2012, http://www.notbored.org/ecrits-preface.html)

For more information on the relationship between RAC and the SI, consult King Collins’ excellent piece at http://www.greenmac.com/CCE/RAC_01.html

I welcome corrections, additions, suggestions, etc. from original members of RAC or those who may have more insight into this material.

Rare. RAC items are found in neither the trade nor on OCLC (though the Tamiment library of NYU mentions some printed material related to the group in one of its finding aids) 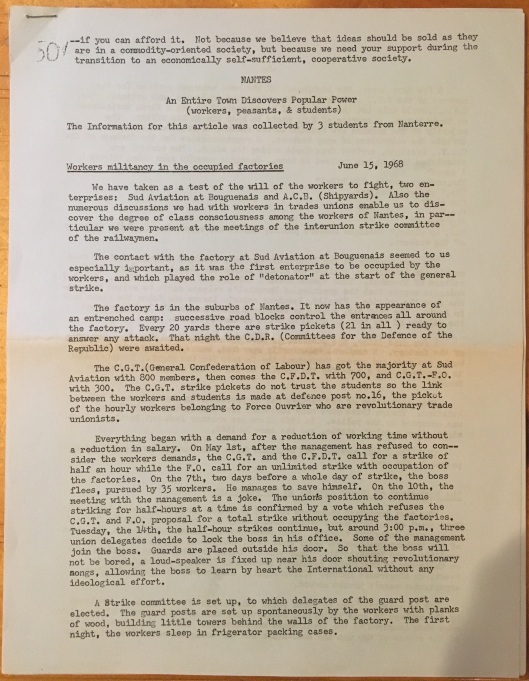 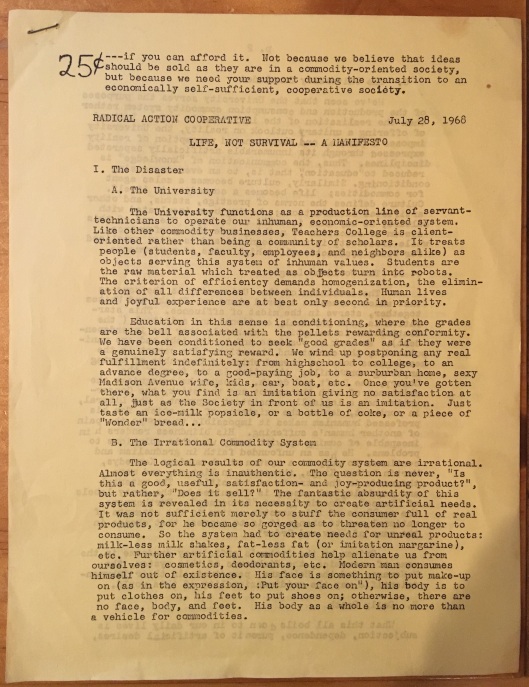