For those of you living in or near the San Francisco Bay Area, I am co-curating an exhibition/retrospective entitled Against Cinema: Situationist Film and its Legacy. It will be held at the ProArts Gallery at 150 Frank H Ogawa Plaza in Oakland California from August 30 to September 27. More information can be be found here 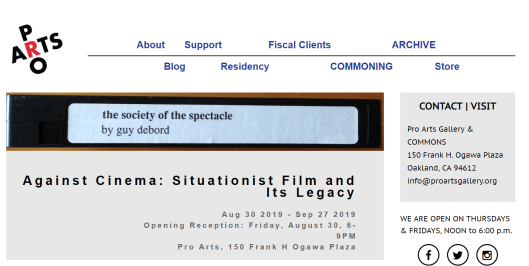 On June 30, 1952, Guy Debord’s Hurlements en faveur de Sade (trans: Howls for Sade) premiered at the Ciné-Club d’Avant-Gardes in Paris. A few minutes into the film, a narrative voice stated: “There’s no film. Cinema is dead. There can’t be film anymore”. Many of the viewers walked out, while others loudly protested the film. The chaos was so severe that the screening was halted after only a few minutes.

Situationist cinema is both scandalous and revolutionary because it rejects many of the core premises of cinema. First: Film-making is about creating new images, producing new representations. La Société du Spectacle (trans: Society of the Spectacle), Debord’s screen adaptation of his 1967 book, defies this principle. The 88-min full-length feature contains absolutely nothing new – every shot is “borrowed” from existing media sources. The film includes footage from TV ads, news reports, documentaries, and masterpieces of world cinema like Battleship Potemkin.

Second: Images and sound should support each other to create an immersive (or at least coherent) viewer experience. In La Société du Spectacle, Debord substitutes the footage’s original soundtrack with voice-over readings of material from his theoretical treatise and music by 18th century classical composer Michel Corette. In his La Dialectique peut-elle casser des briques? (trans: Can Dialectics Break Bricks?) – dubbed “the first completely detourned film in the history of cinema” – René Vienet takes a conventional, B-list martial arts film and turns it into a story of revolutionary class struggle. This is done by preserving all the visuals while altering the soundtrack (through a “creative” dubbing of the original Chinese) to tell a completely different story.

For Debord, “the spectacle is…a social relation among people, mediated by images.”. Through film, he (and other like-minded film-makers) seek to “dismantle the spectacle” (T. Levin) – that is, to uncover the mechanisms at play in spectacular society. As such, cinema operates as a critical medium for Situationists to articulate their radical criticism of the spectacular-commodity society.

The exhibition, Against Cinema: Situationist Film and Its Legacy, seeks to retrace the history and legacy of Situationist film. From its inception in the Lettrist works of Maurice Lemaitre, Gil Wolman and the young Guy Debord in the 1950s through the Situationist-influenced films of René Vienet in the 70s, Isaac Cronin in the 80s, Michel Hazanavicius in the 90s, and Tiqqun in the 2000s. While there have been numerous retrospectives of Guy Debord’s film – at the Magic Cinema in Bobigny (2002), the Cinema le Miroir in Marseille (2006), the German Cinemateque in Berlin (2008) and the Yamagata Film Festival (2009), among others – far fewer (if any) attempts have been made to look at Situationist film more broadly. In addition to film programming, this exhibition is unique in bringing together some of the most prominent creators, translators and critics of Situationist cinema. The gallery will also feature a collection of unique original artifacts pertaining to Lettrist and Situationist artifacts, with items ranging from movie posters, lobby cards, film stills, original movie scripts, bootleg VHS tapes, censorship leaflets, film synopses and more. All in all, this is an occasion to fully immerse yourself in Situationist cinema.

Heath Schultz and Guy Debord. Society of the Spectacle (2013) with an introduction by Heath Schultz

The exhibition draws from the Internationale Situationniste and its aftermath archive. Through nearly 2,500 items, the archive retraces the History of the avant-garde movement, starting with the foundation of the Internationale Lettriste (1952-1957) through the Internationale Situationniste (1957-1972). Significant attention is paid to the ways in which the Situationist International shaped the artistic and political discourse in the U.S. and the U.K. from the 1970s onwards, with the likes of King Mob, Black Mask, Processed World, Upshot (John Zerzan), the London Psychogeographical Association, or Tom Vague – to name a few. The archive also shows particular strength in Lettrist and Situationist cinema.

The archive was exhibited at the Lily Library at Indiana University (Bloomington, IN) as part of the Wounded Galaxies – Beneath the Paving Stones, the Beach symposium and festival in 2018. Individual items have also been featured in Geneva’s MAMCO (Die Welt als Labyrinth) and Berlin’s Haus der Kulturen der Welt (The Most Dangerous Game), also in 2018.

The archive is currently located in Mountain View, CA and is accessible free of charge, by appointment. Hundreds of unique or otherwise unusual items have been digitized and are shared through a dedicated blog: https://situationnisteblog.wordpress.com/. The archive is also part of the Public Collectors, a project to “make available cultural artifacts that public libraries, museums and other institutions and archives either do not collect or do not make freely accessible” (http://publiccollectors.org/SituationnisteCollection.html)

Mehdi El Hajoui has been researching and collecting the Internationale Situationniste and its aftermath for the last decade. He has spoken about the topic at Princeton University, Indiana University – Bloomington, the Philobiblon club of Philadelphia, and the Red Victorian in San Francisco, CA. Mehdi was the winner of the Jay I. Kislak Foundation Student Book Collecting Competition in 2010, and he completed the Colorado Antiquarian Book Seminar (CABS) in 2015. He is a graduate of Harvard University.